For several weeks now, the noise out of Washington is “austerity” and “deficit reduction”.    It is claimed that we *have* to start solving the deficit problem Right This Second or our country will default, we’ll have hyperinflation, etc, etc.

Let’s look at what the data is actually telling us.   First, let’s look at the US Treasury rate.  If you loaned money to someone that you didn’t completely trust to pay you back, you would charge them a higher interest rate for that risk.    If the bond market didn’t trust the USA to pay its bills, they would charge us a higher premium for borrowing money.

So if the bond market isn’t worried, may we should worry about inflation instead… 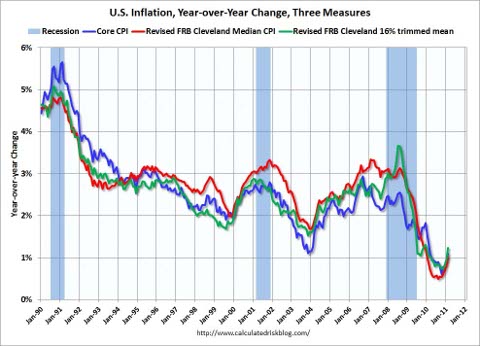 Inflation isn’t a concern either, but *deflation* is.   Notice that inflation had slowed to 0.5% back in January.  Between the economy starting to recover, and the Treasury launching another round of quantitative easing, inflation bounded upwards to…  1.2%.

This is hardly Zimbabwe-style hyperinflation.   It’s well below the Fed’s 2% inflation target, which is generally considered a healthy level of inflation.    And that’s assuming the economy continues to recover.   If Congress doesn’t raise the debt limit, if Europe doesn’t solve their debt crisis, if China’s real estate bubble pops…   Inflation will head back down again, and possibly spiral into deflation.

So if we don’t have to worry about the bond market confidence or hyperinflation, what should our elected leaders actually be worrying about?   To paraphrase Bill Clinton, it’s the unemployment, stupid.

Regular unemployment is roughly 9%.   Count in people who have stopped looking, or are working a part-time job when they’d prefer to work full-time, and that goes up to about 16%.   So why are these loons in office not focusing on our actual problem?   That’s a post for another day.