Imagine  you own a business and are depending on it for your retirement.   You are faced with two possible investments:   One that returns a dull, boring 6% return year after year, or one that 90% of the time makes 12%, but the other 10% loses 150%. 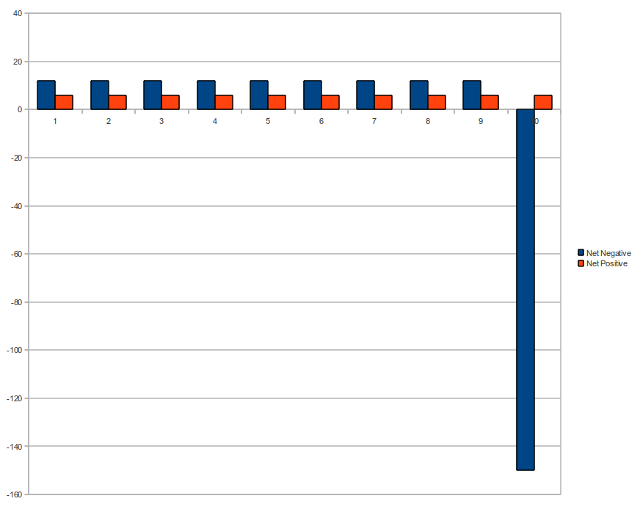 The first investment is a net-positive investment.  You’ll never lose money.  The second investment is net-negative.  Nine out of ten years you’re doing better than the boring guy, but that tenth year wipes out all your profit and leaves you in the hole.

Given that, an owner would always choose the dull, boring investment to avoid losing his business (and thus his retirement).  But what if you’re not the owner?   What if you’re a manager instead?

Here’s why incentive matters.  The manager has a strong incentive to gamble and choose the net-negative investment.  He has a 9 in 10 chance of beating the boring guy in any given year, and is more likely to be promoted or receive a competing job offer based on his “superior performance” before the doomsday hits.  And if he’s wrong, it’s the company’s money, not his.   Heads he wins, tails the company loses.  It’s incompetence and short-term thinking masquerading as success.

This dynamic appears in many places in life, including politics.  Politicians love making promises today that don’t have to paid until tomorrow.  Think about it from their perspective:  If you’re reelected every 2 years, you’re probably not going to be the one in the hot seat when the bill comes due 10 years later.  Heads they win, tails the public loses.

This dynamic also occurs in business, but unlike politics, business has found ways to minimize it, by requiring managers to own shares in their company (and thus think like owners), or by vesting bonuses over 3-5 years (and forcing them to think long-term).

So my open question to the reader is:  how can we impose similar restrictions on  politicians, to make them act more like owners instead of managers?  Complicating factor:  the average voter is even more focused on the short term  than the average politician.