Reducing unemployment, growing incomes, and getting things back to normal are at the top on everyone’s wish list nowadays.  Both Tennessean’s real income and employment crashed in 2008, and have yet to recover to their former levels. 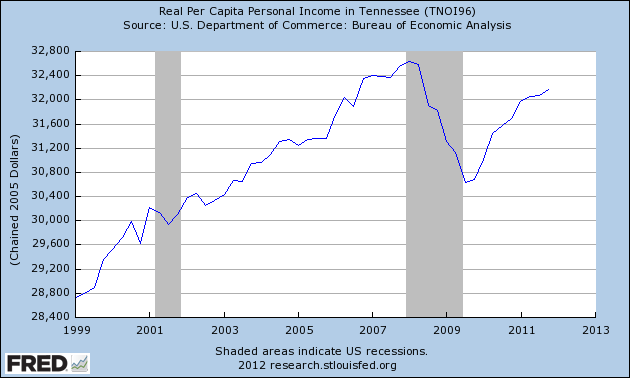 In normal times, it typically takes a country 4-5 years to fully recover in the aftermath of financial crises.  However, those crises occurred against the background of an otherwise healthy world economy, and were usually cured by wage deflation stimulating increased exports to healthier countries.

The current crisis hearkens back to the Great Depression, in that most of the world’s major economic powers are experiencing a simultaneous slowdown, and thus there is little hope of an export-led recovery (unless Little Green Men show up on our doorsteps wanting to trade).  And there are more negative economic signs than positive on the horizon.  Given that, full recovery is likely to take a further 5-10 years.

The chart below highlights the essential differences between a normal economy and one experiencing a “balance sheet recession”, which is a polite academic term for a depression. 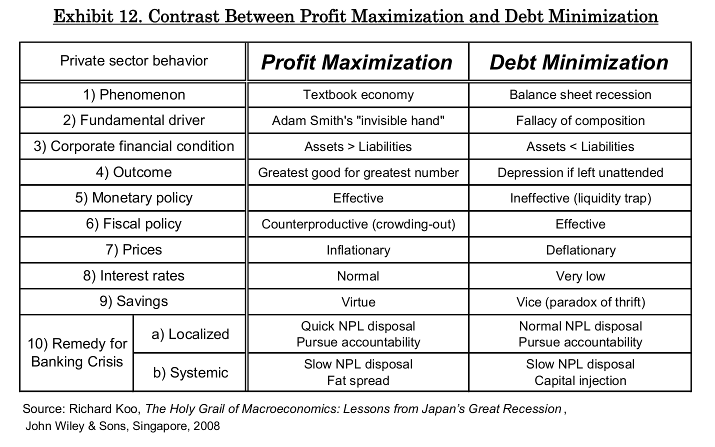 In normal times, the desire to consume exceeds the desire to save. Supply-and-demand allows savers to charge consumers (via the interest rate) to borrow their money. For their part, consumers do their best to keep all those dollars circulating through the economy, creating a virtuous cycle that causes the economy to grow.

While that is usually true, a depression is the exception that proves the rule. Because people are now underwater due to the housing collapse, they have switched from consuming to saving.  Now that savers outnumber consumers, consumers have pricing power when it comes to borrowing, and that has pushed interest rates on savings accounts and CD’s near 0% (and in the case of US bonds, *below 0%* in real terms), hurting savers.  For their part, consumers increased savings rate sets off a vicious cycle which causes the economy to shrink.

It has similarly affected business investment. Companies are now avoiding profitable investments that require long horizons to pay off in favor of short-term debt minimization.  From their perspective, why invest in a new factory or new machinery when consumers aren’t in any position to increase their spending?  Paying off debt is much less profitable, but also much less risky.

That simultaneous drop in both personal consumption and business investment has generated distressing levels of unemployment. 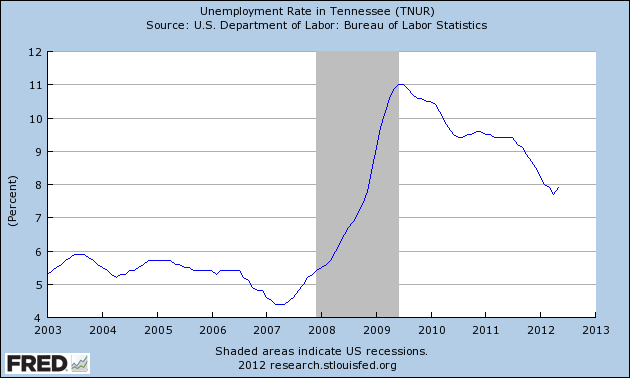 The “natural” rate of unemployment (absent the economic crisis) is roughly 5.5%. Today after three and a half years of recovery, unemployment still stands at 7.9%. Arithmetic says:

If it were a city, it would be the 5th largest in the state, ahead of Clarksville (136,231).  And that does not include people who are working part-time but want to work full-time, or people who have given up looking altogether.   So the 154k Tennesseans is only a lower limit on the size of the unemployment problem.

Even if you still have a job, the tough economic outlook combined with abundance of unemployed has hit incomes hard, especially for blue-collar workers.  It’s hard to negotiate for a pay raise when there’s 5 unemployed people who would happily do your job for less.

Economics can be a constant source of irritation to politicians, because while it always gives the answer you need to hear, it rarely gives the answer you want to hear.  Unfortunately, when it comes to solving problems of this scale, the intersection of what’s economically desirable and what’s politically possible can be achingly small.

The public always wants political decisions to be pain-free and in their favor.  On the other hand, politicians often take a short-term ideological view, and advocate “solutions” that cause further long-term harm because it helps them today and they will be out of office before the butcher’s bill comes due.  And the state’s year-to-year balance-budget requirement, while normally a wise constraint on legislative ambitions, in current circumstances prevents the state from taking steps that are in the public’s long-term best interest.

With all that said, what steps do you believe the state can take (via tax structure, expenditures, infrastructure investment, training, economic development, etc.) to stimulate the state economy, help put people back to work and put us on a sustainable path to growth?

2 Responses to Question for TN 78th candidates: The Economy