After last month’s Supreme Court ruling, Obamacare (officially known as “The Patient Protection and Affordable Care Act”) is now the law of the land.   Almost everyone sees it as merely the beginning of actual healthcare reform, not the end.  It is likely to be the most contentious issue of the upcoming legislative session, and no matter what is decided it is likely to leave bruised feelings for some.

In general, government policy towards markets can be divided into three categories:

The laissez-faire approach is usually seen as the optimal choice from markets ranging from oranges to iPods to automobiles, as robust competition usually yields better results at lower costs.

Healthcare has unique differences from other markets which render a pure laissez-faire policy challenging at best.  Put simply, it is difficult to square the laissez-faire philosophy of “if you don’t pay, you don’t receive” with the Christian ethos of the Good Samaritan.  For most people, compassion ultimately trumps capitalism, but the cost for the uninsured must inevitably be paid, and today that someone is either the taxpayer, the insurance holder, or the hospital, but *not* the person receiving the “free” healthcare.

Given the remaining policy options, the Republican party has historically supported solutions based on the individual mandate (prior to its recent Damascas road conversion on the issue at least), and Democrats have supported single-payer solutions.   While the PPACA is admittedly a unwieldy amalgamation of policies, its core approach to the healthcare market uses the individual mandate.

As attempts to “repeal and replace” the PPACA appear increasingly unlikely to prevail, reshaping it at both the state and federal levels appears to be the most probable path towards refining the law.

1.  Do you support/accept the base PPACA plan, or do you think Tennessee should request a “waiver for state innovation” to implement our own alternate healthcare reform plan (single-payer like Vermont, or perhaps a different form of individual mandate such as Health Savings Accounts plus catastrophic insurance)?   What do you believe leads to the best outcome for all Tennesseans?

2. While mostly upholding Obamacare, the Supreme Court struck down the provision allowing the federal government to withhold all federal Medicaid funding towards states that failed to expand their Medicaid program in accordance with the PPACA.  Several Republican states have subsequently promised to refuse additional federal funding to expand their state Medicaid program.  What are your thoughts on this?

Outside those two questions, please feel free to explain your beliefs about healthcare at length.

I am including a graph of the percentage of Tennesseans covered by health insurance.   You can see that it has been trending down for over a decade.  Given a state population of 6.4 million, the roughly 5.5% decrease in the coverage rate between 1999 and 2010 equates to approximately 350,000 Tennesseans who can either no longer get or no longer afford health insurance.  This is equal to the combined population of Knoxville (180,761) and Chattanooga (170,136). 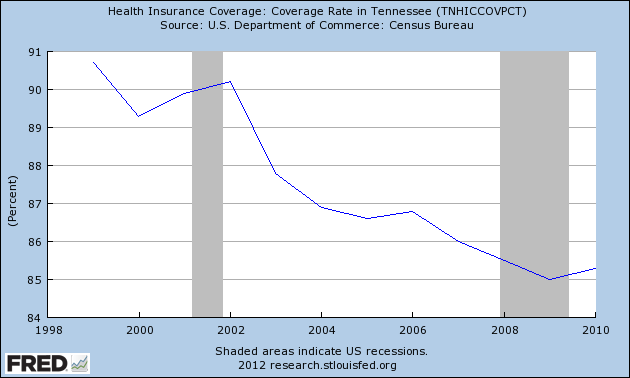