Trying to understand the economy is hard enough if you’re an actual economist.   But if your a normal person trying to filter through all the people who are just repeating the latest crazy they read on the Drudge Report and it can sometimes feel like a lost cause.

This is my attempt to poke holes in some of the uglier truths and lies I see in the news. 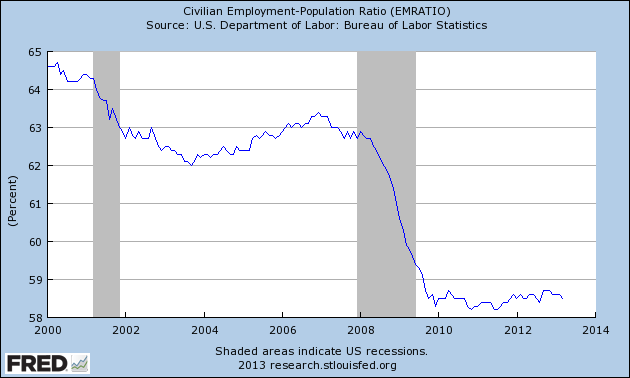 There are several ways to hide bad unemployment data under the rug (for instance, someone who has given up looking for a job is no longer considered unemployed for statistical purposes), so instead I look at employment since it’s harder to fake.

The graph shows that employment plummeted in the aftermath of the financial crisis in 2008, and hasn’t recovered an inch of territory in the past 4 years.

The population of the USA grows by 1% a year, so our economy has to add that many jobs every year (roughly 150k jobs per month) just to stand still.  The economy has only added 139k new jobs per month since the start of 2012.   You do the math. 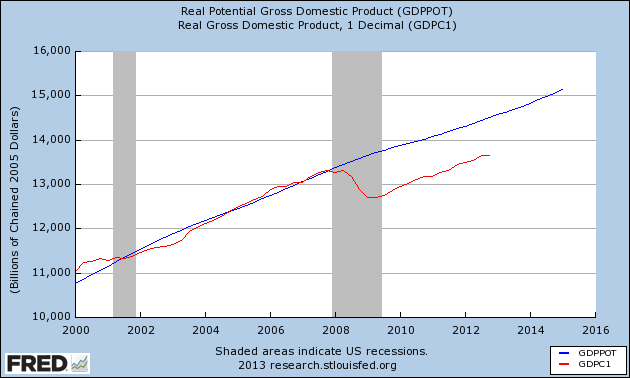 Compare the potential GDP of the country (what it would be if our factories and employees were all humming along at full capacity, in blue) vs actual GDP (in red).

GDP plunged sharply as the financial crisis unfolded.  In previous recessions, that gap closed quickly once the economy began picking up.   But not this time.   Either the gap is not closing at all, or at best will take years, possibly over a decade, to close at current rates.   And here is the cost: 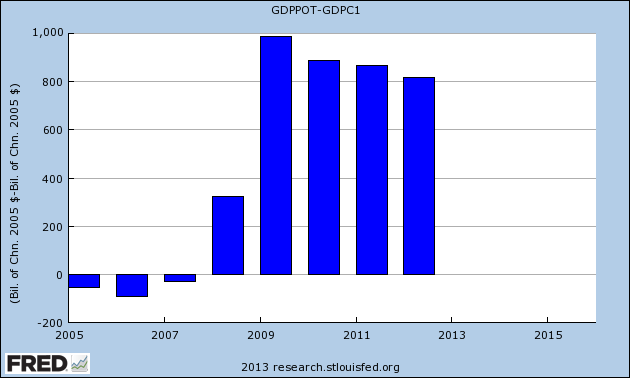 No one likes to see government borrow money to stimulate the economy.   But in the bad spot we’re in, it would have made much more financial sense to spend $2 trillion dollars on fiscal stimulus in 2008 to avoid losing over $3.8 trillion since then.

Ugly Truth #3:  Our economy isn’t out of danger yet 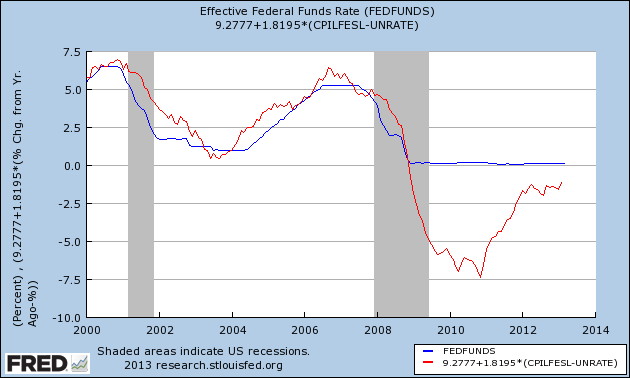 In normal recessions, the Federal Reserve lowers the Fed rate to banks, which makes it cheaper for businesses to borrow, which helps stimulate the economy and gets things moving again.

The problem is, the financial shock caused by the housing bubble bust was so huge, that the Fed would have to lower the interest rate below zero to stimulate the economy sufficiently.  But no one is going to loan you $100 this year, expecting to get $93 back the next year.  That’s what economists call the “zero bound”.

The above graph shows what the Fed fund rate is, versus what it *should* be to properly stimulate the economy (the “Mankiw rule”, using coefficients derived by Paul Krugman).  The red line delineates the economic hole we’ve been trying to extract ourselves from.  The economy has been trapped against the zero bound since 2008, and if we’re lucky we’ll escape the bound next year.

So if we have a outburst of austerity, or Congress fails to extend the Bush tax cuts for people under $250k, or a conflict with Iran raises the cost of oil substantially, or Europe fails to get its economic crisis under control, or the real estate bubble in China pops, or any number of the things I can’t predict happen, and the economy will get worse, quicker than it would in normal times.

Ugly Lie #1:  The market is afraid that the government is borrowing too much. If someone asked you for a loan, and you were afraid they couldn’t pay you back, you would increase the interest rate you charge them to compensate you for the additional risk you were taking.

The graph shows that the interest rate the market charges Uncle Sam on 10-year debt has been *decreasing* for a decade.  And after adjusting for inflation, today the market is actually *paying* the government 0.68% return a year (as of 5/4/2012) to borrow their money for 10 years.

Plus, with all the uncertainty in the world, people are willing to leave a little money on the table in order to have their investments stored in something safe, and the USA is the best of a lot of bad choices.  That’s why the real interest rate is negative.

Rather than being afraid of government borrowing, the market is screaming, in flaming letters 50 stories high, “Please borrow *more* of our money so that the increased demand for money will raise the interest rates so we can get a decent return on our bonds and CD’s”.

Ugly Lie #2:  Inflation is out of control 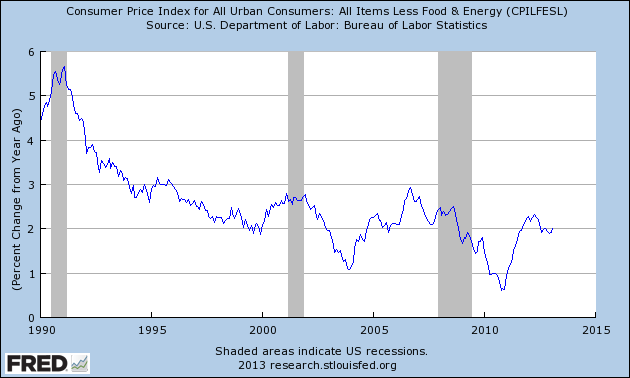 Inflation is actually well within its usual historical range of 2-3%.  Last year we were actually in danger of *deflation*.

People mistakenly believe inflation is causing prices to go up mostly due to three things:

1.  Supply-and-demand.   The price of oil is increasing because people in China and India and elsewhere desire the same comfortable life with cars and air conditioning that we have.   The problem is, the demand for oil is growing faster than the supply of oil.  Econ 101 tells you that means rising prices.  The price of food has gone up as well, partly because oil has gone up (oil is used to make fertilizer, drive tractors, and haul things to market) and because unusual patterns of drought and flooding killed an above-average number of crops in 2011.

2. Increased volatility.  Back in the 90’s when there was an oil disruption, we just asked the Saudis to open the spigot a little wider.   They had more than enough spare capacity.   But today they’re pumping all-out and don’t have any slack.  That means whenever Iran rattles its sabers and threatens war, the price goes up because the market knows there isn’t any spare capacity to cover up a disruption.   But it also means when the market calms, prices can drop quickly.

3.  Frequency bias.   People notice price changes in things they buy more often.  You buy food and gas twice a week, so when the price goes up you notice it quickly.   You buy a house every 20 years, so while the price of housing is still dropping like a rock, you don’t notice it.

Ugly Lie #3:  Obama has led to an unprecedented expansion in government 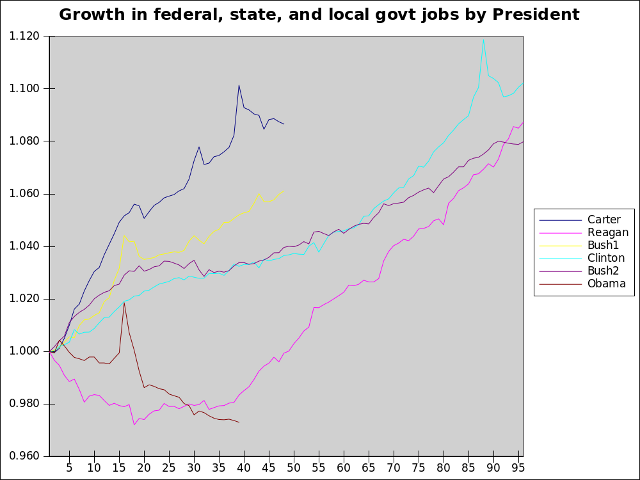 The graph shows the total number of federal, state, and local workers, graphed by month beginning with the president’s inauguration.   Government during Obama’s presidency has shrunk by nearly 3%.

While that might sound good to the conservative ear, the Wall Street Journal estimates that had those government jobs been preserved, unemployment would now be 7.1% instead of 8.1%.