The graph shows what I call Cheatham’s intrinsic growth rate, which shows how much faster Cheatham is growing than the state as a whole.   (For you FRED types, it’s TNCHEA1POP – TNPOP, with the two census-related peaks at 2000/2010 smoothed by averaging the year before and after)

Cheatham has serious problems.  Cheatham’s growth rate has been slowing for decades (the red line shows the average trend).   Between 1983 and 2000, the intrinsic growth rate hovered in a “trading range” centered at 1.85% (dark blue line).  The two blue lines on either side show the mean +/- 2 standard deviations.

Before 2000, Cheatham was growing faster than the state.   After 2000, growth suddenly decelerated, and it appears to be getting worse.   The long-term state growth rate is 1.05% a year, so that last data point shows the county’s population is dangerously close to shrinking in absolute terms.

I am much less interested in pointing fingers than solving the problem before it gets worse.   My own research shows the impact fee (and probably the sprinkler requirement too) are serious culprits.   There are also contributing causes (AO Smith acquisition of State, lack of infrastructure in the county, and being in a long-term secular bear market since 2000), but as far as I can tease from the data, they are only accessories, not the prime suspect. 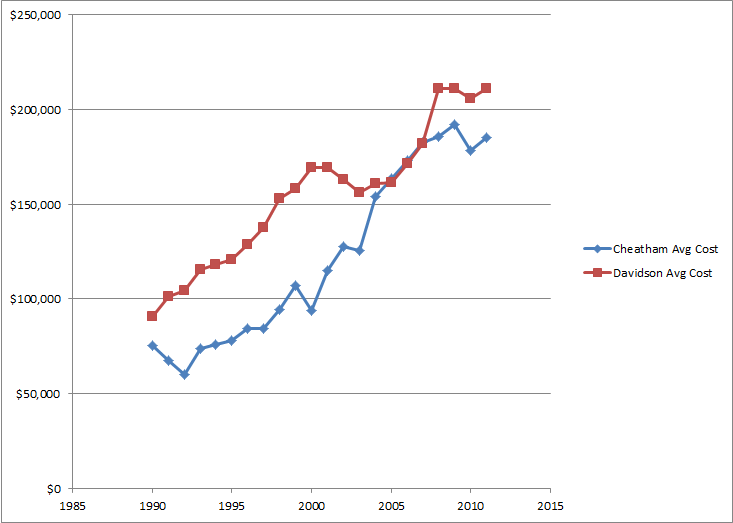 The spread has widened in recent years, but growth did not come back.   I suspect this is due to the Great Recession making it difficult/impossible for most folks to just pick up and move somewhere, so I have hope that when things get better, growth will take back off.  I hope.