Are Democrats or Republicans better for the Federal debt?

Republicans and Democrats constantly argue about how the other side is going to explode the country’s debt. Let’s examine the historical data and see who’s been telling the truth (or more realistically, who’s lying less).

Here is a graph of the growth rate in real per-capita Federal debt (ie, how fast your own personal slice of the Federal debt pie is growing every year) in percent since 1967: 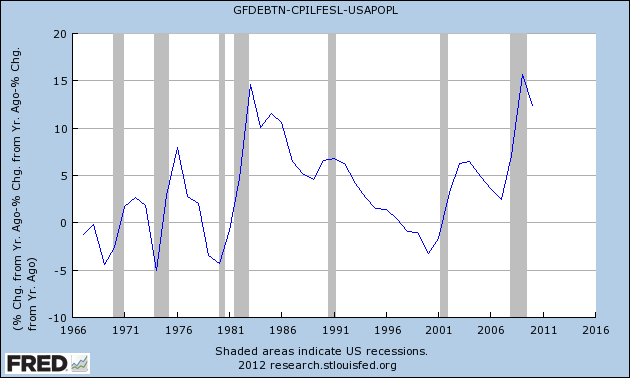 The raw data for this graph is available at FRED by clicking here.

I did a regression assuming the debt is partly based on political factors (which party the president belongs to,  and which parties controlled the House and Senate), and economic factors (the Mankiw rule uses inflation and unemployment to predict the Fed Rate, which is a useful measure of how healthy the economy is).

And here’s a graph so you can see that this model does a fairly good job of describing what actually happened: 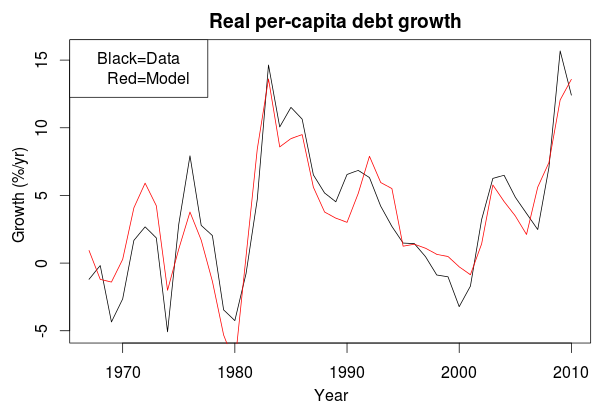 Here’s the debt growth that strictly due to economic factors: 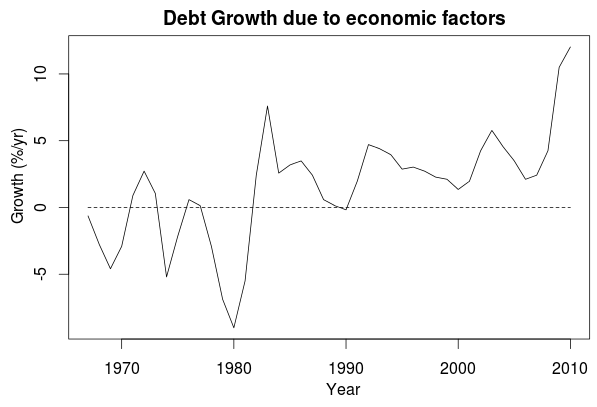 Before 1980, the average debt growth due to economic conditions seesawed below 0%, which is good.  Afterwards though, it started on a slow, ugly upward trend.  I am uncertain of why, though it may reflect slowing productivity growth, growing income inequality, or demographics shifts increasing entitlement outlays (or it may be something else altogether).

Now let’s see which political party has been better at controlling debt: 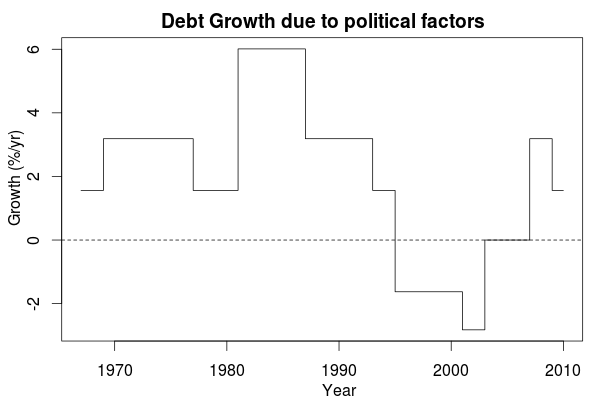 Here’s how each possible combination of party affects the debt growth (from best to worst):

I notice some interesting things:

So what are the likely outcomes of the 2012 election? Intrade says that Obama is likely to keep the Presidency, the Republicans are likely to keep control of the House, but the Senate is still in play. My numbers suggest that if Republicans capture the Senate, it will increase the growth in Federal debt by (-4.5% - (-1.8%)) = 2.9%.   The average year-to-year change in the growth rate is only 2.8%, so an additional 2.9% swing in a year is huge.

1 Response to Are Democrats or Republicans better for the Federal debt?