Why Cheatham County’s growth is vanishing

I spent the morning examining Cheatham’s slowing growth in Excel and R, and came up with a good model that helps illuminate the cause, and perhaps can start the ball rolling for a solution.

First, the pretty picture to show you how closely the model matches the actual data.  Notice population growth plunged from ~4% per year in the early 90’s to almost 0% today. 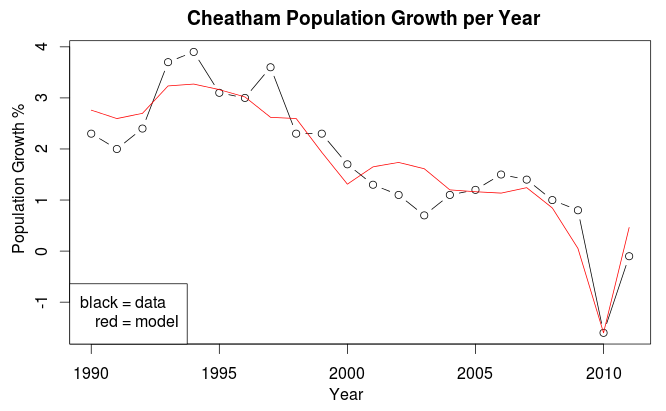 I analyzed a number of possible statistics, and found four that were significant (don’t worry if this seems like Greek to you, I’m just throwing them in for the other math geeks).

The state of Tennessee grew 1.012% per year over the period in question.  The “(intercept)” parameter (0.9677%) is probably measuring this, and differs slightly due to random noise in the data.  This always contributes positively to growth.

The next statistic (MankiwFedRate) is a measure of the health of the national economy (it combines inflation and unemployment to predict the Federal Funds Rate), and while it have a statistically significant effect, in the best year ever (1990), it only added 0.53% to our growth; in the worst year (2010), it reduced growth by 0.41%, and on average it actually boosts growth by 0.2% a year.

So if the state and national economies are actually helping us, it means the roots of our declining growth problem lie at home.

The 2010 Flood was (we hope!) a once in a lifetime event that knocked 2% off the county’s growth that year.   Not much we can do about that.

“CheaUnempDiff” is the difference between Cheatham’s unemployment rate and the national unemployment rate.   Historically, Cheatham has had a much lower unemployment rate than the country as a whole, probably due to being a small county and State Industries creating a large number of jobs relative to population. 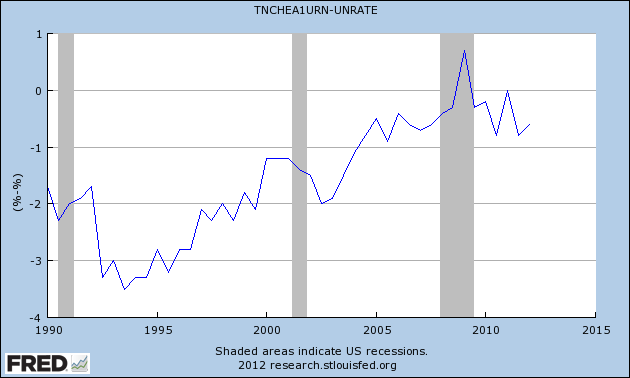 You can see in the early 90’s our unemployment rate was over 3% below the national rate.  However, that enviable position has eroded away over the years.

My model suggests that if Cheatham could get its unemployment situation back to what it was in 1994, we could increase the growth rate in the county by 1.8% a year.   That one step alone takes us halfway to our best year in two decades (1994, 3.9% growth), and by itself would be more growth than we’ve had in a year since 2000.

That should put a bullet point on the urgent need for economic development projects like the Red River Industrial Park, as well as a need to beef up infrastructure and education to attract more businesses (and hopefully higher-margin businesses).

The average price of a new home in Cheatham started growing faster after 2000.   That didn’t happen in neighboring counties.  They either grew at the same pace, or in Davidson’s case actually got cheaper for a few years) 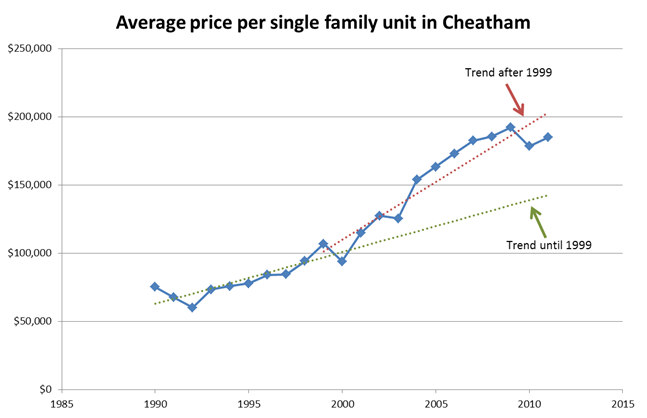 The Impact Fee was introduced in 1999 to tame growth, and it appears to have succeeded at that.  The impact fee is currently $3750.  Multiply it by the “-1.323e-04” coefficient in the table above, and it predicts the impact fee is reducing the county’s growth by about 0.5% a year.  That may have been acceptable when growth was 2-4% a year, but now that growth is negative, it should be urgently revisited.

Both of these problems (finding a job and buying a home) disproportionately hit those who are young and just starting off in life, which explains why Cheatham is forecast to lose a significant number of 20-30-somethings (and their children) in the next decade.   If you’re just starting out in life, are you going to move someplace that has fewer jobs and more expensive housing?

But this isn’t “destiny”.   It’s a problem we can solve if we choose too and roll up our sleeves.  Look back at the top graph again, and see where we currently are and nudge it up by 2.3%.   Suddenly all our problems go away.

Yes I know it’s not quite that easy in the real world.   There are all kind of political issues to navigate.  You have to overcome resistance, build coalitions, educate, and keep pushing the rock up the hill.  But compare it to the alternative…

If you are an elected official and would like me to go over this with you sometime, please let me know.  I’m happy to dig into the raw data and show you how I derived this.

You can get a spreadsheet of my numbers by clicking here.

1 Response to Why Cheatham County’s growth is vanishing