A world with too much money…

Here’s a hypothesis for my economics-minded friends. The fundamental driver of economics is supply and demand. The more demand exceeds supply, the more profit a seller can demand from a buyer. And conversely, the lower demand is relative to supply, the less profit they can demand.

For instance, if I am selling a house in a hot Nashville market, I don’t have to take just *any* price.  As a rational actor interested in maximizing my profit (hi Prof. Froeb!), I can bide my time and wait for a high bidder to come along. Conversely, if I’m selling in Flint MI, I would be wise to take the first semi-decent bid that comes along.

Let’s apply supply and demand to money itself. People want to borrow money (they are the “buyers”) and people who want to save money (they are the “sellers”). When the economy is booming, there are relatively more people borrowing than saving, so profits (ie, interest rates) go up. Conversely, if you’re in a Great Recession, more people are less interested in borrowing money, and profits (the interest rates) plunge.

Now, let’s look at the interest rate the US Government pays on 10 year treasuries, ie. the profit that lenders can charge our government to borrow their money: 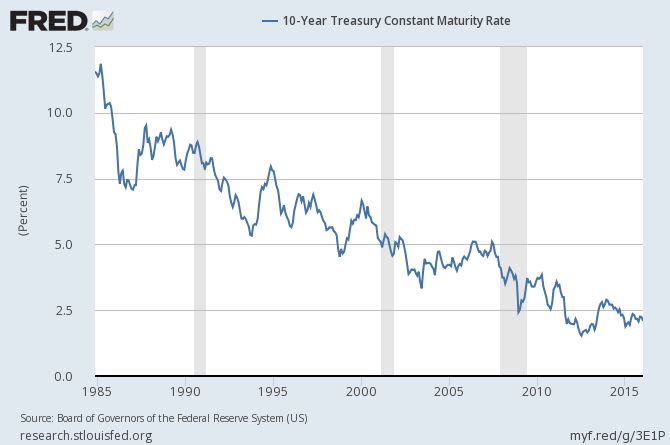 Notice that, while it does fluctuate around a bit, over the past 30 years it has trended downward, no matter how the economy is doing or what political party is in office at that time. That implies that the cause of lower interest rates is something else. And it’s a relatively smooth, constant decent. Something long-term, not day-to-day, is causing that trend.

My idea (and I’m happy to consider alternatives if anyone has a better idea) is simply that there is more money, than there is places to stick that money.  Supply and demand tells you that prices (interest rates) will go down, which is exactly what we see.

Over the past 30 years the world has gotten wealthier, so there’s more money sloshing around that people are trying to save, but the growth in investment opportunities hasn’t kept pace with the growth in capital, so lenders are being forced to accept smaller and smaller profits.

If true, it would seem to have a number of “interesting” consequences on people’s long-term investment strategies (I am sure there are many, many more which have not occurred to me, so share if something comes to you!):

The “savings glut” problem is further compounded by income inequality, but I don’t have any good ideas what that means yet.  I’ll show you my Nobel Prize in Economics when I understand them both…

As I have both a 401K and a desire to retire before I’m 90, I would be *delighted* to be wrong, but haven’t seen any data that would dissuade me from my thesis.   I’m not sure what the future holds (or else I’d be typing this from my secret volcano lair instead of my cubicle at work), but anyone who expects the next 30 years of economics/politics/investing to look like the previous 30 years is probably crazy.