The economy this fall

First, the good news.   Inverted yield curves are a powerful signal of an incoming recession.   The last time there was an inversion was in 2019, right before the pandemic recession.  Thankfully, the yield curves on US Treasury bonds (which often invert 6-12 months before recessions) are all normal and aren’t showing any sign of a recession on the horizon.  Which suggests that any near-term market tumult is likely to be temporary.

My only hesitancy here would be the rumblings I’m hearing about the Chinese real estate bubble.   Keep an eye on that.   If I’m wrong about “no recession”, that’s the most likely reason why.

That said, there is a lot of reason to suspect a stock market correction of 10-20% is looming in the near future.    Let’s consider a few issues at hand:

And yet despite all that potential terrible news, the stock market keeps climbing.   That dichotomy cannot continue forever.   I’d be shocked if it lasted until November.  The stock market appears to be running on “irrational exuberance” and primed for a correction.

I’ve created a chart using five standard ways of measuring stock market valuation.   Even though they use different measures, they all approximately similar results.   And they show that the current stock market is the second most overvalued its been in the last 140 years, surpassed by only the Dot.Com bubble.    Which suggests that when the market turns pessimistic, it is likely to have a larger-than-usual correction. 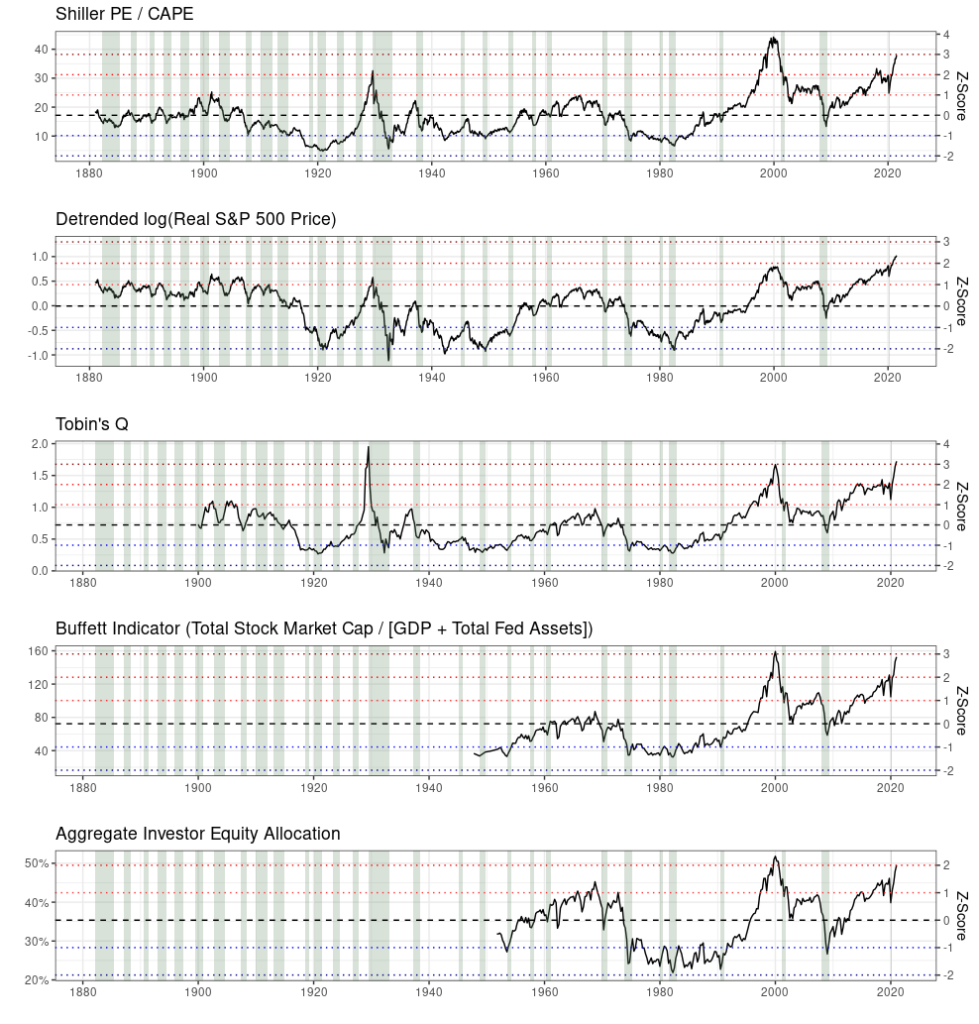 The bottom valuation indicator (AIEA) shows the best correlation with subsequent 10 year S&P 500 yields.    At its current valuation, the S&P can be expected to have negative returns over the next decade. 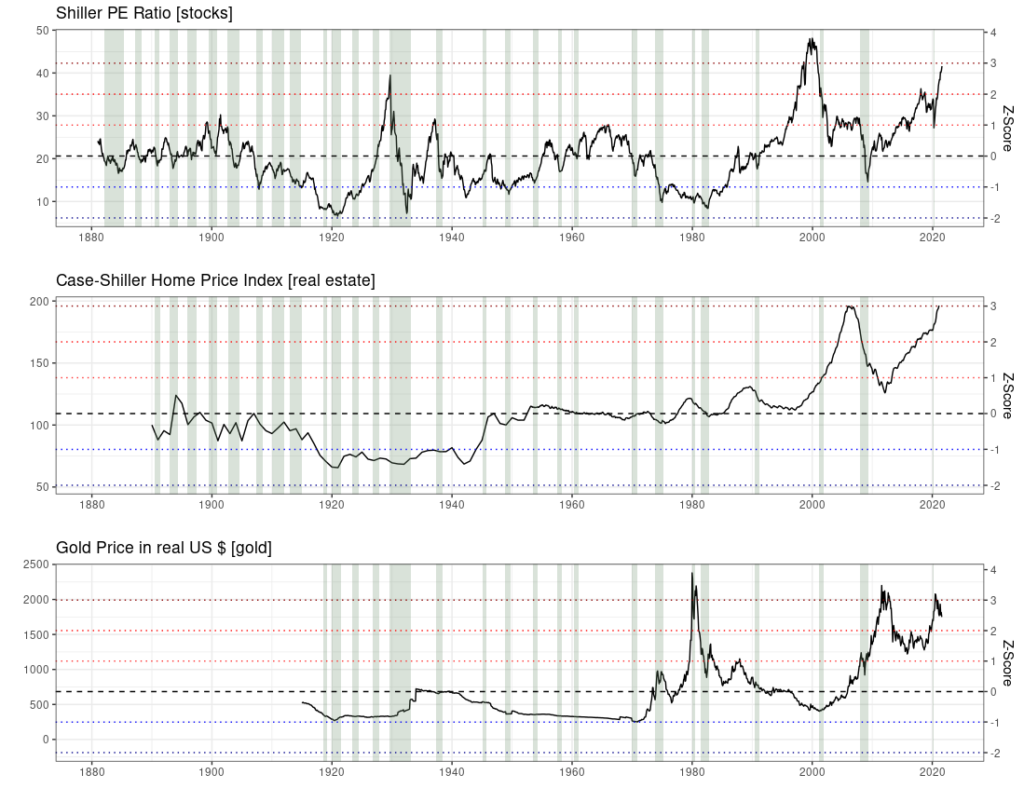 So right now I’m in cash for the next few months until a “buying opportunity” emerges in the stock market.    Then…   If the prices are good, I like the long-term above-average  growth shown by Tractor Supply, Dollar General, U-Haul.   Still researching others, so if you have a good suggestions, let me know!

Prices have risen in recent months due to two potential factors:  Inflation or inflation expectations, and supply/demand imbalances.   We know the latter is a major factor (new used cars, lumber, CPU’s and other electronics have all experienced substantial price increases due to demand exceeding supply. 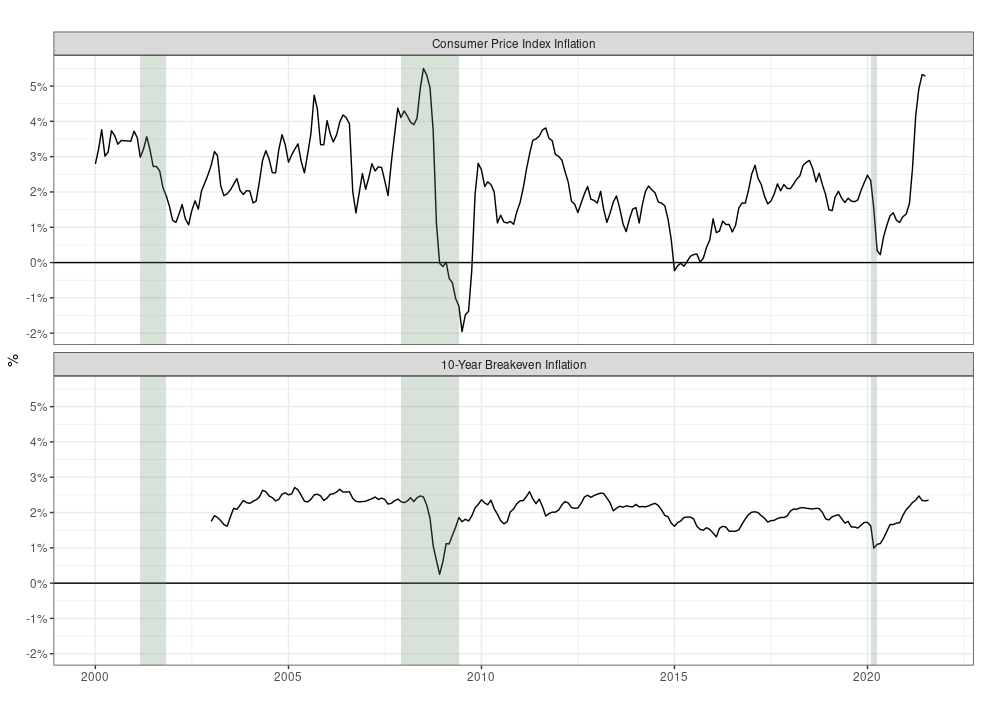 CPI Inflation is much more volatile than 10-year breakeven inflation.  There’s always a bad harvest, manufacturing plant fire, run on toilet paper, or something that temporarily makes things a bit more expensive.   And we *know* there are huge supply/demand imbalances that are having huge effects on prices right now.

But supply/demand imbalances cut both ways.   The next harvest is fine, they rebuild the plant, they catch up on toilet paper, they get computer chips to build their cars, and the price falls back down.   Indeed, they often end in a supply glut where prices (and profits) fall below their normal levels.

When “inflation” shows up in CPI inflation but not Treasury breakeven inflation, that strongly suggests that it’s not actual inflation.   If you look at breakeven inflation, it’s the highest it’s been in a few years, but it’s back at the level it was in 2012, and I don’t remember people clutching their worry beads about inflation then.

The two big possible exceptions are labor prices and home prices as both of them have historically proven “sticky”.   I don’t worry about higher labor prices too much as I think people with more money in their pockets to spend is a net good for the economy.    I don’t think home prices are likely to plunge  ala 2008 anytime soon, but I suspect the Fed’s imminent taper is likely to pull the plug on the extraordinary growth rate we’ve seen over the last few years.   If you’re going to sell your home, right now is probably a very good time…

If you’re asking why you’ve heard so much about  “Inflation!!!” this year, there has been a huge incentive for the Biden administration to push the “Inflation!!!” angle has hard as possible, regardless of its verity.   When people smell inflation and believe things will be much more expensive tomorrow, they tend to pull ahead their future purchases to today.  That additional purchasing stimulates the economy.   It’s like a free fiscal stimulus, all they have to do is not say anything that contradicts the story.

Just because I don’t think we have “Inflation!!!” now doesn’t mean I’m not concerned about it.   I definitely expect that inflation will be higher than average over the next decade.   I just believe that deflation is the bigger near-term risk.

The “Biden Boom” is not a natural, healthy business cycle, but was paid for by a lot of money printing at the Fed combined with a tremendous amount of fiscal stimulus by Congress.    If the ER doctor gives your near-death grandfather a shot of adrenaline to the heart, grandpa might be able to run circles around the hospital, but don’t mistake motion for health.    Our economy isn’t healthy at all, merely running on economic adrenaline.  And I expect grandpa is more likely to crash and burn than win a slot on the Olympic team.